The Most Likely Position in Football to Get Injured

A friend of mine asked the following question: "what is the most likely position in football to get hurt at?" And the answer is: Offensive Lineman.

No but here's my underlying analysis: I decided to focus on NFL players, since injury data is more reliable and also more readily available (thanks to fantasy football). I could pull players on the PUP (Physically Unable to Perform) and IR (Injury Reserve) lists, but since we're currently in the preseason, those lists won't show the collective toll of injuries over the full course of a season.

Thankfully Football Outsiders broke down games lost to injury by position at the end of last season, which we can use as a proxy to answer the question. But what about adjusting for time spent on the field? Thankfully this metric incorporates this, since starters spend more time on the field than reserves, and their metric, Adjusted Games Lost (AGL), does the following:


(1) Injuries to starters, injury replacements and important situational reserves matter more than injuries to bench warmers; (2) Injured players who do take the field are usually playing with reduced ability, which is why AGL is based not strictly on whether the player is active for the game or not, but instead is based on the player's listed status that week (IR/PUP, out, doubtful, questionable or probable).


I then took these results and calculated the average AGL across each position group:

The average team lost Offensive Linemen for 17.23 games last season, which is over 8 times the average time lost for Quarterbacks: 2.30 games. Predictably, the offensive stars seem relatively protected: RB, WR, and QB all fall in the lower half of this list.
Posted by Michael Stock at 6:00 PM No comments:

Email ThisBlogThis!Share to TwitterShare to FacebookShare to Pinterest
Labels: nfl

Last year there was Stan Hooper. This year I'm taking things into my own hands and, after an obligatory glance at preseason rankings and strengths of schedules, I will make some bold predictions about the upcoming season. Here are EIGHT things that will happen this season:

1. North Carolina will be this year's fraud ACC team
There's always at least one! We play two FCS teams. Let that sink in. We could go 6-6 and not make a bowl game because WE PLAY TWO FCS TEAMS. We'll still manage to blow at least 4 games, finish 8-4, and somehow win the Coastal in a convoluted 3-way tie with Miami and Georgia Tech. Maybe throw Va Tech in there after they win 7 games without ever scoring more than 10 points in any one game.

We will then get blown out by Clemson in the ACC Championship game and lose to an SEC team by 28+ points in the subsequent bowl game. That is the ceiling for our season. To repeat: this is the best case scenario. A 4+ touchdown loss to end the year.

2. Georgia will win the SEC
They're definitely winning the SEC East, and the West could easily cannibalize itself to the point where some (relatively) mediocre team makes the SEC Championship game and gets pile-driven in Atlanta by the dawgs, the dawgs that die! Like, every year. Because they're inbred. Just like Georgians! Of course, barring 2 SEC teams making the College Football Playoff (CFP), this does imply the following...

3. Alabama will miss the CFP
This seems unthinkable, but (as you probably already know), the SEC West is freaking stacked. All 7 teams are in my preseason Top 25, and I wouldn't be surprised if they all ended the season there as well. Alabama will lose at least 2 games, and potentially a 3rd in the SEC Championship game (if they get that far). These fans will be awfully disappointed: 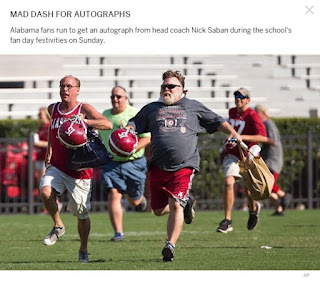 Of course, this will leave Tammy in a bittersweet emotional state, since Alabama won't be vying for the national title, yet neither will her beloved Tigers.

Quick aside: The Nick Saban breakfast is absolutely phenomenal. Two Oatmeal Creme Pies and a cup of coffee, every day. I highly recommend it; it has transitioned nicely from my college days to now having a full-time job. TRUST THE PROCESS.


4. Al Golden will be fired after Miami goes 6-6 again
But they'll still beat us and win a share of the Coastal championship. It will no longer be the AL GOLDEN ERA BABYYYYYYYYYYY.

5. The ACC will be the conference left out of the CFP
I'll admit this isn't very bold. Big 10 (Ohio St), Big 12 (Baylor or TCU), SEC (Anyone), Pac-12 (hopefully Oregon's BOOM offense) all seem like locks. Florida St will be a middling Top 25 team, only bested by middling Top 25 Clemson. No one from the Coastal has any chance. So we continue to turn in to the Big East! Except apparently we can beat SEC teams in bowl games (but not Carolina. Remember we're losing by 30 sometime in late December).

6. Tennessee will beat Florida
It's gotta happen eventually right?
Editor's Note: This is not bold either. Tennessee is currently favored in that game:

7. Ezekiel Elliot will win the Heisman Trophy
The QB situation in Columbus is a good problem to have, and all due respect to Braxton Miller, J.T. Barrett, Cardale Jones, and Terrelle Pryor, but the reason Ohio St won it all last year was Ezekiel Elliot. That being said, it might go something like this: 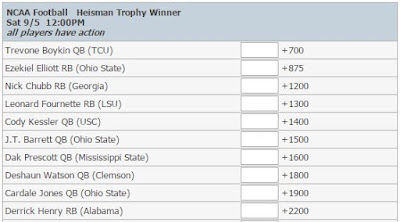 While we're at it: two QBs who aren't even guaranteed to play meaningful minutes are BOTH in the list of top 10 most likely players to win the award given to the most outstanding player in all of college football. This incredible wealth of talent makes the last prediction pretty easy...


8. Ohio St will repeat as National Champions
With a relatively weak conference slate (at least compared to the SEC or Pac-12), the Buckeyes should cruise to 12-0 and easily make the CFP. While they won't have the element of surprise this time, once there they'll cruise to a second straight title behind 4 players who are/were considered front-runners for the Heisman (2 QBs, a QB turned WR, and a RB that I think will actually win it this year).

Editor's Note: Given the last three "bold" predictions, I'm sure you'll be shocked to learn that tOSU is in fact the outright favorite: 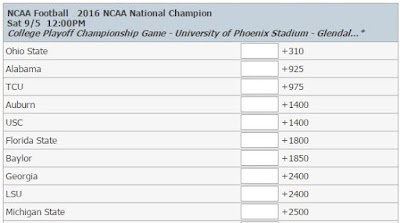 With that all being said, some teams have a chance at a better season than others. But right now, everyone is at 0-0. No one has a loss yet. So for now... ROCK CHALK JAYHAWK. 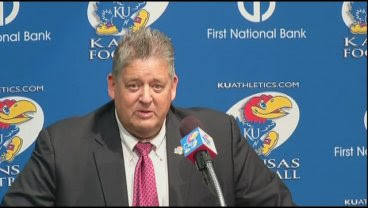 Simulating the Gambler's Ruin in Blackjack

However, in the short-run it's possible to win money (otherwise people wouldn't gamble). So what if you played until you were up a set amount and then quit, or played until you lost your entire bankroll? While this is not directly the Martingale system, the central premise of being up a little bit before you're down a lot is the same. This is directly analogous to the Gambler's Ruin in that in the long-run you will always end up at 0, but we're concerned with short-run fluctuations. So just how often would you come out ahead?

I wrote a simulator (in Python) to test various strategies/goals 10,000 times each. I assumed the following win probabilities on any given hand:

I then changed two variables: what percentage of your bankroll you bet on each hand and how much you had to be up before you quit. However, first a word of warning: the applicability of these results overstate what would happen in real life, because the computer is not flawed in ways that humans are:

1. It always plays the correct strategy
2. It's disciplined and quits as soon as it gets to the predetermined amount
3. It doesn't ever tilt
4. It doesn't ever get tired or indulge in one too many comps

Here are the probabilities you come out ahead for each given combination of what percentage of your bankroll you bet on each hand and how much you need to be up before you quit:

So the more aggressive you are with how much you bet on each hand, the more likely it is you gain a small percentage before you lose everything. Of course, the House does have an edge, so in the long-run the expected values for ALL of these strategies are negative:

Posted by Michael Stock at 11:34 AM No comments:

If You Could Remove One Opposing Team's Player in a Game, How Would You Do It? Part 2

This post is a continuing analysis of the "Tranquilizer Theory": what if you could remove one opposing player for the remainder of the game, at any point in the game? When would you use it? Who would you use it on? Part 1

Previously I only looked at using the tranquilizer on the best player on the opposing team at the beginning of the game and how it would affect your team's win probability. Now I'll look at how when you use the tranquilizer affects your odds of winning, assuming you wait to use it during the game. One critical component of this, however, is that you must be in the lead late in the game for your team to gain the largest advantage (by taking away the game-changing play that would have led the losing team to come back). Intuitively, this makes sense: when you're trailing you have more to gain; thus, as the leading team, you have more to lose.

If You Could Remove One Opposing Team's Player in a Game, How Would You Do It? Part 1

While watching a myriad of different sporting events in college, my friends and I would often discuss a theory that would make any sport more interesting and complex: what if you could remove one opposing player for the remainder of the game, at any point in the game? In other words (and this is the PC version), what if you had a tranquilizer, with one dose, that could take out someone on the other team at any time? When would you use it? Who would you use it on?

The second question is a lot easier than the first, so let's assume we use the tranquilizer right when the game starts, so the opposing player would be out for the entirety of the game. Your goal then would be to remove the player who would most likely have the largest positive impact on the game for their team (and we're talking in the general case, for an average team. In some cases this choice would be obvious based on your opponent).

Read more »
Posted by Michael Stock at 10:00 AM No comments: