Hurricane Rates Fitted to the Poisson Distribution, as Evidence of Climate Change

One year does not make a trend - so the larger question is whether hurricanes/named storms are a Poisson process, and can we can use the Poisson distribution to determine whether recent years are exhibiting an increased trend. This has been shown mathematically, and the criteria certainly seems to fit tropical systems, just like it does with shark attacks:

The Poisson distribution arises in connection with Poisson processes. It applies to various phenomena of discrete properties (that is, those that may happen 0, 1, 2, 3, ... times during a given period of time or in a given area) whenever the probability of the phenomenon happening is constant in time or space.

The key part here is "probability of the phenomenon happening is constant in time" - is the probability of a hurricane/named storm increasing over time?

In each chart, I'll present two comparisons - one over the entire HURDAT history of tropical cyclones in the Atlantic (1851 to now), and another just in the satellite era, which is 1967 to now. While NOAA undergoes extensive reanalysis projects to fill in past years prior to satellites, it is still very possible that more storms are named today due to increases in data and technology, including satellites: 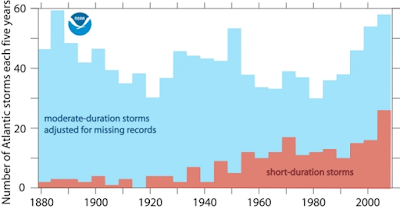 Email ThisBlogThis!Share to TwitterShare to FacebookShare to Pinterest
Labels: best of, non-sports

Before the 2020 election, I concluded that the rate of voter fraud was so low that it was extremely unlikely to affect the outcome - and the only scenario in which it could, would be if the election was unfathomably close - 2000 Bush/Gore close.

And that didn't happen. But the election was close in the electoral college, with 3 states once again deciding the presidency: Georgia (+0.3%), Arizona (+0.3%), and Wisconsin (+0.6%) account for 37 electoral votes, which would have resulted in a 269-269 tie, which would have almost certainly gone Trump's way (in effect, tie goes to the Republican, based on the current geographical distribution of votes). In fact, the margin in those 3 states was actually closer than in 2016 - making this election the second-closest (electorally), behind only 2000.

And with turnout at its highest since 1900, applying the estimated rates of voter fraud to the larger turnout and narrower margin... still doesn't swing the election. Updated close electoral college margins:

Updated table, with sources:
The 2018 midterms had a historic rise too, gaining 44.7% compared to 2014. So how many more voters voted in the presidential election, relative to the most recent midterms? That turnout metric was up 38.9% compared to 2018! Which... is the lowest midterm-to-presidential increase since 2000. The next closest is 2012 (presidential) vs 2010 (midterms), which grew 48.8%.
In chart form, the record-breaking turnout doesn't even appear that out of line with recent trends:
No matter which trend is challenged, the conclusion holds: the rate of voter fraud did not change the outcome of the election.
Posted by Michael Stock at 12:01 PM No comments: