My original NBA play-by-play simulator had the Bucks winning it all, but analyzing the simulator's head-to-head results a step further correctly predicted the Heat coming out of the East.

So I re-ran just the NBA Finals 10,000 times, given the continued lack of home court and the current rosters (Rondo is back now for the Lakers, for example). The sims continue to love the Heat - far more than the betting markets do, where they're around 3/1 underdogs.

The Lakers only win the title about 2/5ths of the time - which is even more bullish than FiveThirtyEight, which has them as whopping 27% underdogs.

FiveThirtyEight attempts to address for differences in the playoffs - such as LeBron's habit of coasting through the regular season and turning it on in the postseason. Even so, I don't think either of our models are appropriately accounting for this - both LeBron, and his entire team, upping their effort level in the postseason.

The Heat's system is certainly the better one mathematically, but I honestly don't trust my own work here - I wouldn't bet against LeBron.

Posted by Michael Stock at 11:04 AM No comments:

Coming off forecasting the Miami Heat to come out of the East in the ongoing NBA playoffs, the MLB playoffs are now upon us, and I'm using my play-by-play MLB simulator to project this year's unique mess of a playoffs. Since the 3 Wild Card game matchups are set, I used the top 3 starting pitchers from each rotation pitching on short rest throughout the playoffs (Game 4 starter = Game 1 starter, for example).

Multiple wrinkles make this year way more wide open than ever before:

On the best-of-3 series: an illustration with the best team in baseball, the Los Angeles Dodgers. They're heavy favorites in each game against the Milwaukee Brewers, their round one opponent, on average winning any one game 64.9% of the time. In their first round, best-of-3 series, they are favored to win 69.3% of the time. However, if the same matchup was in a best-of-5, this would increase to 74.4%. And in a best-of-7, it would increase to 77.8%.

On home field, or lack thereof: home field advantage has decreased over time as of late. So in the first round (at home ballparks), should I use the last 5 years, an implied win percent bump of 1.2%? Or my original estimate of 2%? Ultimately I stuck with this season's abnormally high 2.2% rate, even with no fans. But what about the neutral sites? I relied on some research I did awhile ago that showed that the effect of batting second gives the "home" team a 1.5% advantage by itself. So 2.2% in the Wild Card round, 1.5% in all other rounds for the higher seeds. 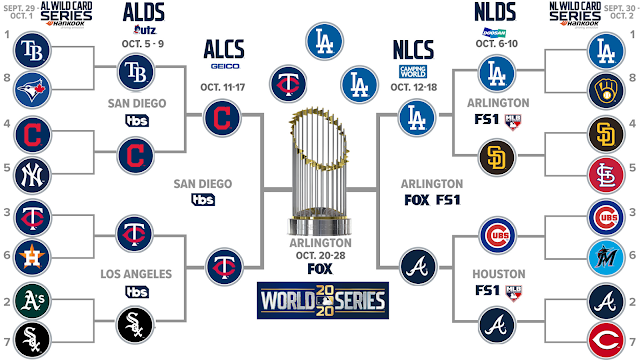 Posted by Michael Stock at 1:00 PM No comments: