"What are the odds?" I See an "Imagine" John Lennon License Plate in Florida

The current zeitgeist surrounding the The Beatles: Get Back documentary on Disney+ has elicited a question for me - how likely is it for me to see the rare specialty Florida license plate of "Imagine", depicting John Lennon? 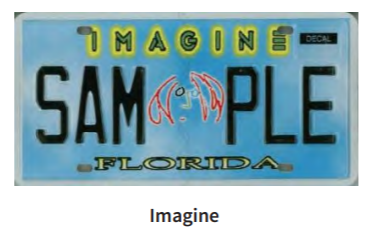 Back in 2003 when it was introduced, there were around 50 types of specialty license plates in the state of Florida, per the South Florida Sun-Sentinel. Now there are almost 150 - and the Florida Department of Highway Safety and Motor Vehicles has all of this data public and readily available, including via some nice interactive Tableau dashboards. But most cars don't have a specialty plate - there are 16.3m registered autos and pickups in Florida. "Imagine" plates make up 0.086% of this total - or 1 in 1,158.
At $25 in donation per plate, the "Imagine" plate is currently raising $352k per year for Florida Food Banks, and $4.8m all-time through August 2021. All specialty plates combined are raising $46.5m in donations per year! This doesn't include specialty plates currently in pre-sale, including the new plate benefiting Florida State Parks.
The current top 10 are below, with "Helping Sea Turtles Survive" overtaking the #2 spot over University of Florida's plate compared to 2020: 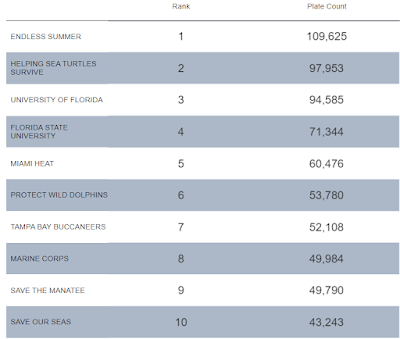 "Endless Summer", supporting Surfing's Evolution & Preservation, is #1, representing 6% of all specialty plates, and 0.7% of all registered Florida autos/pickups. 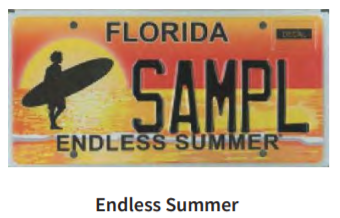 Disclosure: my household currently has the "Tampa Bay Rays" plate and has pre-ordered the "Florida State Parks" plate, and in the past has had the "Helping Sea Turtles Survive" and "Save the Manatee" plates. The full lists can be found here and here.
Posted by Michael Stock at 3:28 PM No comments:

Email ThisBlogThis!Share to TwitterShare to FacebookShare to Pinterest
Labels: "what are the odds?", non-sports

"What are the odds?" Bar Games Edition

Received two bar games-related questions in the past few days - both fitting "what are the odds?" style probability inquiries.

First: the game is a dice roll, with the aim to roll 5 dice to get a Yahtzee (all 5 dice match). You get 5 attempts, but unlike Yahtzee, you don't get to keep any matching dice - you have to reset your roll each time. Entry fee is $5, and the winner gets the pot of all entry fees (minimum pot size is $50). What does the pot size have to be for you to want to enter?

Second: the game is bar trivia, with 20 questions with 4 multiple choice answers each. Say you're trying to tank the game and miss every single question (for draft position next round maybe??) and you christmas-tree each question at random. What are the odds you get at least one question correct by accident?

There is actually a better chance you win the dice game than miss every trivia question!

Posted by Michael Stock at 8:29 AM No comments:

Email ThisBlogThis!Share to TwitterShare to FacebookShare to Pinterest
Labels: "what are the odds?", non-sports

Note: This is NOT paid content for SodaStream... or Spindrift... or Sparkling Ice...

Now I'm going to illustrate why you should purchase none of these things, and get a SodaStream instead.

At the request of avid sparking water drinkers, I've been tasked with comparing the variable per unit cost of a drink from a SodaStream machine, vs purchasing canned sparkling water in bulk. So I tracked every one of my uses of a brand new SodaStream CO2 canister, until it went flat.

Over 4 months, I got 63 uses out of 1 CO2 canister, which yielded 162 drinks. I can buy each replacement canister for $15 each. Since we're only considering the marginal variable cost, I'm treating the initial SodaStream cost as a fixed sunk cost.

All fall to the SodaStream! Even when using fresh produce each time:

Some more descriptive statistics:
Posted by Michael Stock at 1:57 PM No comments:

Note: This is NOT paid content for Sparkling Ice

Previously, I wrote a post definitively determining the number 1 Spindrift flavor to be Lime. I have this same data available for Sparkling Ice flavors, which can be found at places like Wal Mart and Publix, and aim to calculate an explicitly scientific rating like I did for Spindrift.

Compiling the ratings of 4 different people, I've calculated a robust, indisputable ranking of all flavors.

Everyone was asked to rate each flavor on a scale of 1-10, with 10 being the highest, and 5 being the average, and the average ratings result in the following expansive ranking set, including Classic flavors, the Caffeine flavors, and even limited edition flavors:

As I did with Spindrift to adjust for this, former guest poster Jason Laso used the technique of calculating each individual's percentile on each rating, which normalizes each person's rating set to be from 0 to 10 and centered around 5.

Doing this on all ratings provides a better assessment over all preferences, and gives a definitive ranking of:

Posted by Michael Stock at 7:46 AM No comments:

Email ThisBlogThis!Share to TwitterShare to FacebookShare to Pinterest
Labels: non-sports

"What are the odds?" The Chances of a Canadian Team Winning the Stanley Cup Are Helped By 2021's Unique Playoff Structure

This season, due to the ongoing pandemic, the 2021 NHL division alignment's were changed, such that the 7 Canada teams only played eachother, including over the first 2 rounds of the Stanley Cup playoffs. Notably, no Canadian team has won the Cup since 1993 - a 26 season drought.

This year's playoffs guarantee a team from Canada will make the semifinals - which of course increases the chance of that team making the Finals (something that's only happened 5 times since 1993), and subsequently winning it all. So how does this help (or hurt) the chances of a Canadian team finally winning the Cup again?

I'm looking to isolate the impact of the postseason format, so it's not as simple as proportionally taking the number of Canadian teams over the number of teams in the league each year (for example, when the league added 2 American teams in 1993-93, 8 Canada teams / 26 total teams = 31% Cup pre-playoffs). Since Canada teams have not been evenly spread across divisions (such as none in the Metropolitan), I want to start the analysis with the initial playoff field each year.

This divisional discrepancy affects the playoff matchups too - so I also broke down each round by seeding. The team with home ice and the higher seed is expected to win about 64% of the time, and calculating this across the entire playoffs identifies 2017 as the single best chance for a Canadian victor - 34%  that year. Using this methodology, there is only a 0.47% chance of no Canadian team winning it all since 1993.

This ranges from 2016, when no Canadian teams made the playoffs, to 2017, when there was an 80% chance of having >= 1 Canadian team in the semis. More than one team can make it that far too, but this doesn't outweigh the fact that in no year is there a 100% chance of 1 team. If every semifinalist has a 25% of winning from there, this only shrinks the odds further (full table below). Using this methodology, there is a 2.06% chance of no Canadian team finishing their run as champions in the past 26 seasons.

Across all three methodologies, there are not many occurrences of Canada having a better than 1 in 4 chance to win it all. Even when considering the outcomes where more than 1 Canada teams reach the semifinals, the downside chance of no Canada team making it that far greatly reduced their odds in any given year. In this context, having at least a 1 in 4 shot at winning the Cup this year represents one of the best opportunities in almost 3 decades.
Posted by Michael Stock at 5:17 PM No comments:

Email ThisBlogThis!Share to TwitterShare to FacebookShare to Pinterest
Labels: "what are the odds?", nhl
Older Posts Home
Subscribe to: Posts (Atom)