The Final Four is finally here, and it is stacked. This is where things really get interesting for Kentucky:

They're still the outright favorite against the rest of the field. However, 53.81% doesn't justify the -150 odds (implied 60% probability) they're currently pegged at to win it all.

And remember, last year Florida was  fairly close to 50% going into the Final Four. So of course they promptly lost the semifinal to the eventual champion, Connecticut. It's why you play the games. Personally, I think Kentucky does it: go 40-0.
Posted by Michael Stock at 8:08 AM No comments:

As promised, I've been tracking the number of times we play many of the fight songs at band performances throughout this year. My ultimate goal was to estimate how many times the average UNC band member performs each of these school songs in their college career over four years. Thanks to Isaac gathering the last data I needed (from a softball gig), I can now publish those estimates.

For example:
The average band member plays 1.22 volleyball gigs per year. At a typical volleyball gig, we play "TAG" 5 times, "Here Comes Carolina" 4 times, "Hark the Sound" once, and "Carolina Victory" once. This then is multiplied out for one year, and then over four years like so:

Finally, the totals (for one year):

And the totals, for a band member over four years:

Note: This factors in the additional home men's basketball games seniors get to attend, as well as travel to men's/women's tournaments.

So the average band member plays TAG almost 1,400 times over the course of their college career.
Posted by Michael Stock at 2:20 PM No comments:

Email ThisBlogThis!Share to TwitterShare to FacebookShare to Pinterest
Labels: best of, non-sports, UNC

Running One Simulation on the NCAA Tournament... Just One

Much is made about simulating the bracket again and again: Prediction Machine does it 50,000 times, I did it 10,000 times for the ACC Tournament last year, etc. But this gives you the most likely bracket, which illustrates what should happen, but definitely not exactly what will happen.

You only play the tournament once, so here's an alternative take: only simulating the tournament once. I used my MDS Model probabilities and my trusty ole TI-84 calculator to generate the random numbers. Again, this is one simulation, so there are some interesting results:


You have to make some bold predictions to win the office pool, and get lucky. Going chalk can put you above average, but it won't get you first place.

Here's the full bracket, based on one simulation: 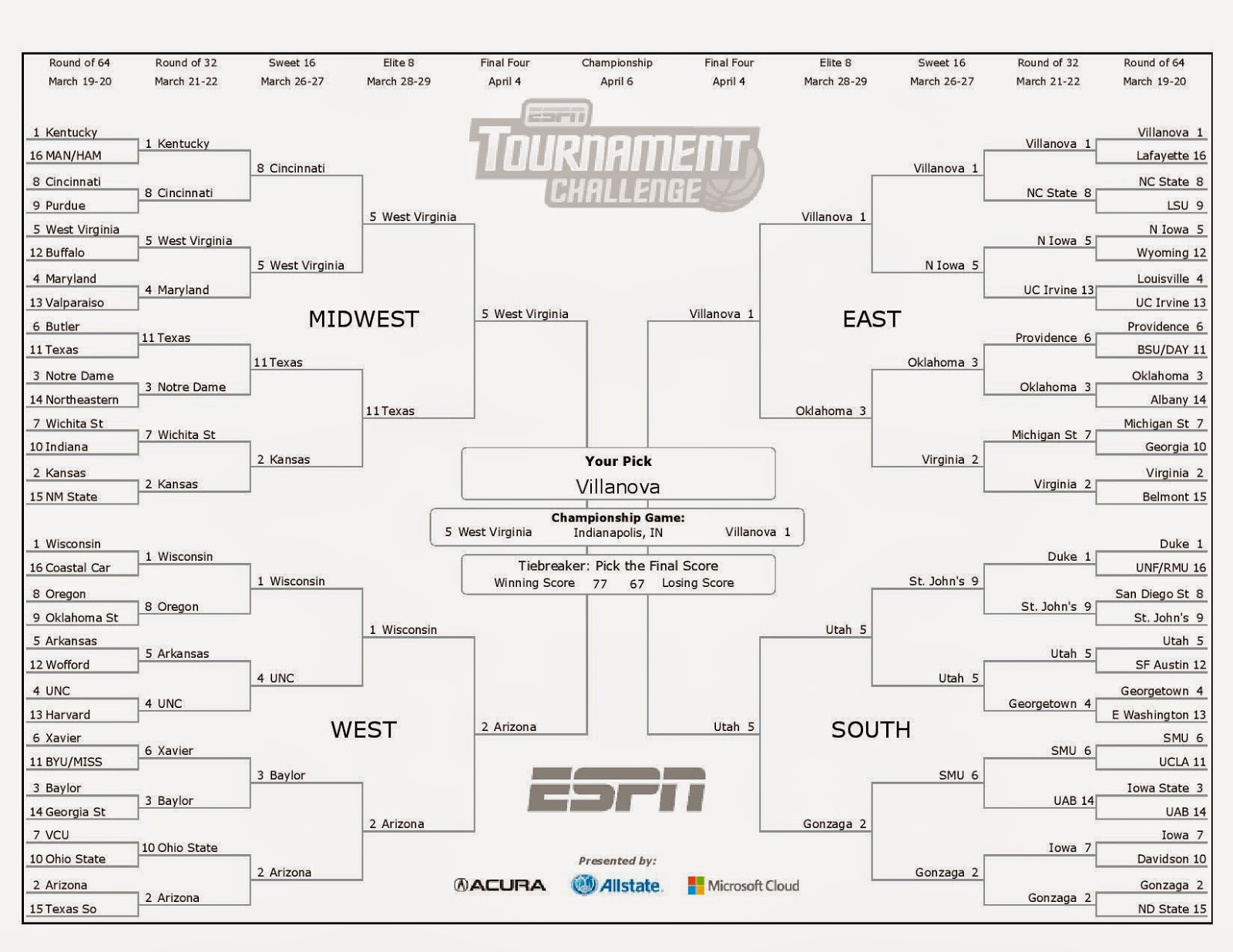 You can generate simulations one at a time using Massey's Ratings here.
Posted by Michael Stock at 9:38 PM 1 comment:

As pointed out by FiveThirtyEight, "Since 2003, the team ranked higher in the A.P. preseason poll (excluding cases where neither team received at least 5 votes) has won 72 percent of tournament games." So why not pick your bracket based on that alone? I prefer the AP poll to the Coaches, so that's what I used from the beginning of this season: 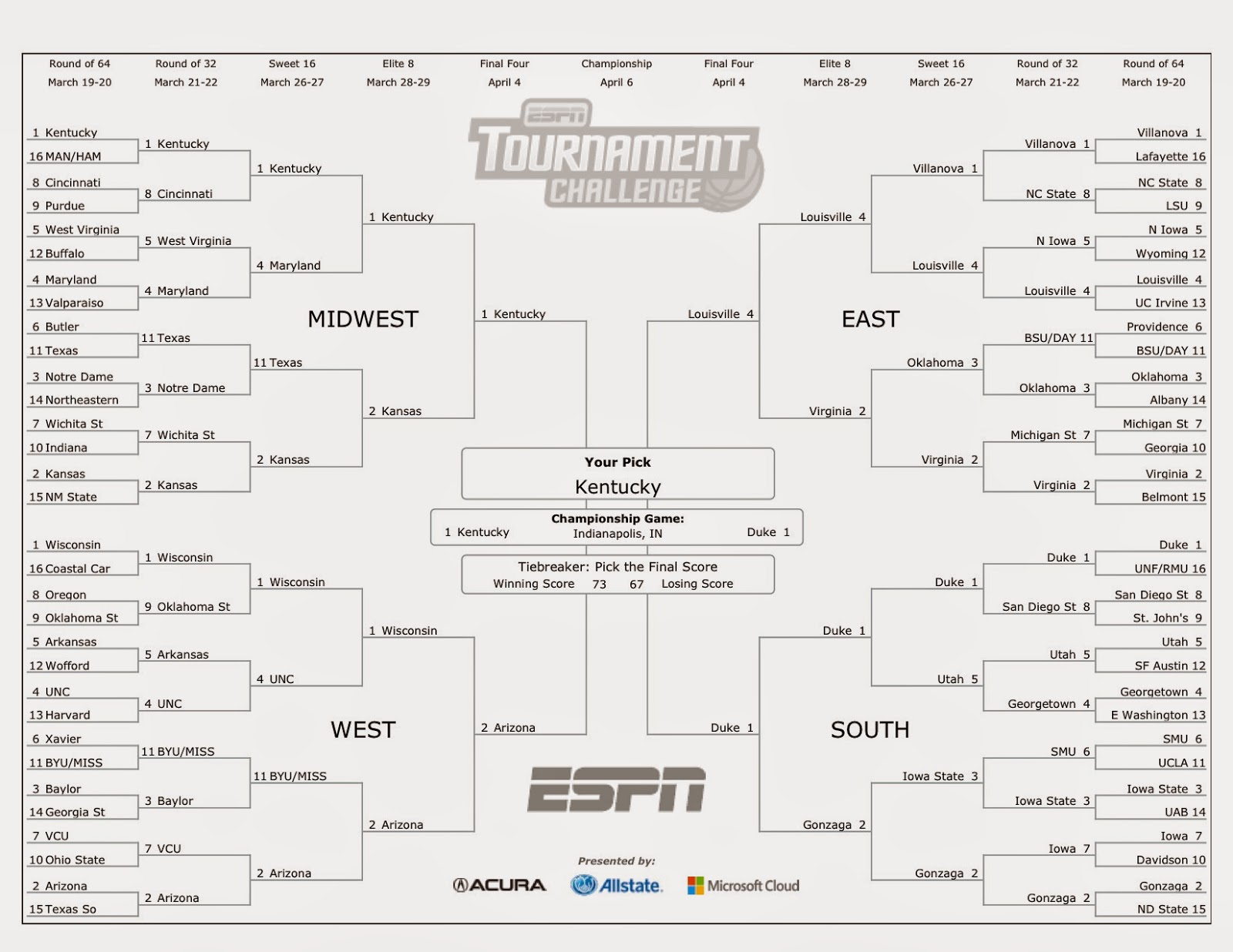 Note: Once again, the final score prediction is drawn from Massey Ratings
Posted by Michael Stock at 11:01 AM No comments:

Email ThisBlogThis!Share to TwitterShare to FacebookShare to Pinterest
Labels: ncaab

Just for the heck of it, here are the MDS Model's picks for the NIT: 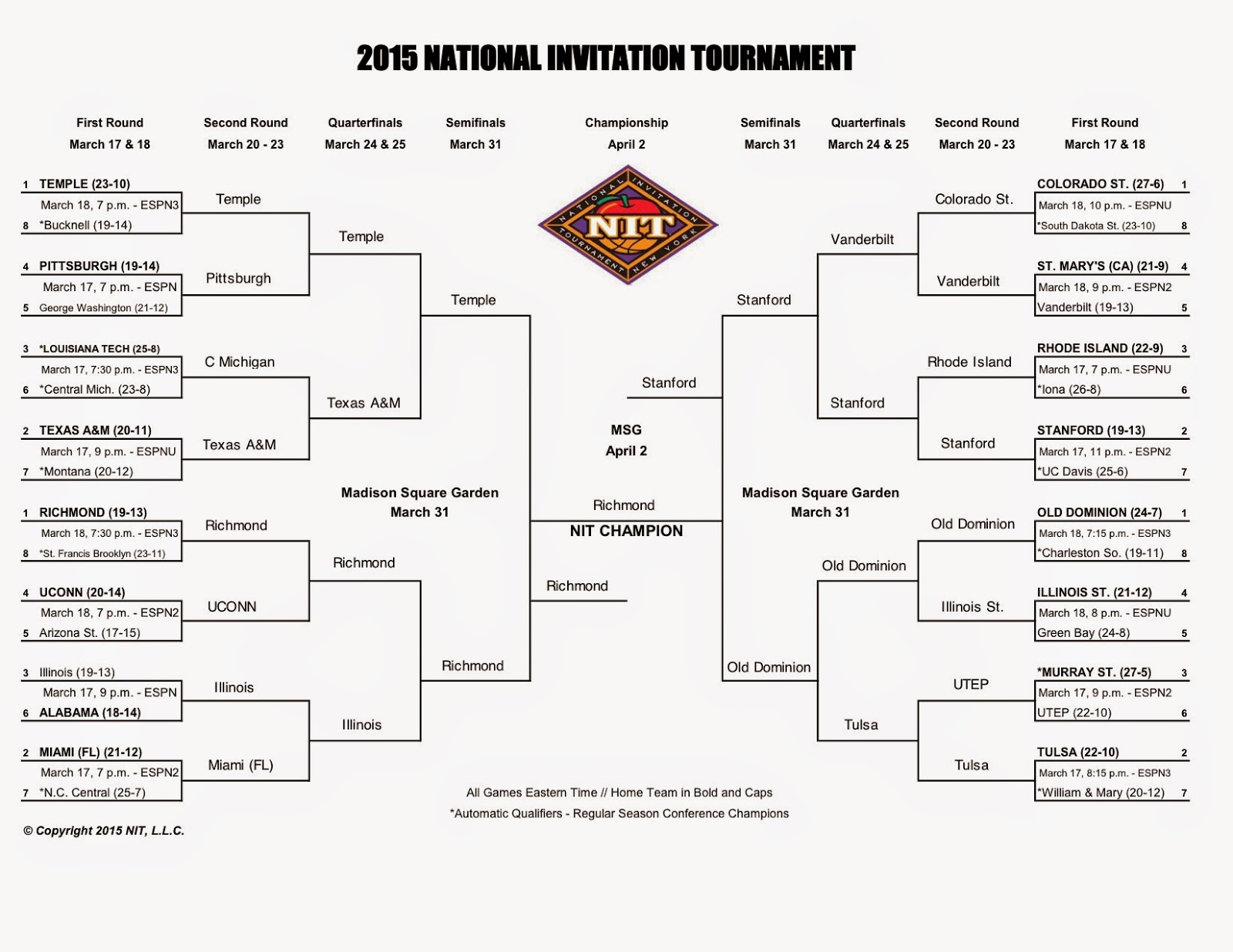 Posted by Michael Stock at 10:20 AM No comments:

Here are the picks by the MDS Model for this year's NCAA tournament, as well as the win probabilities (using Log5). 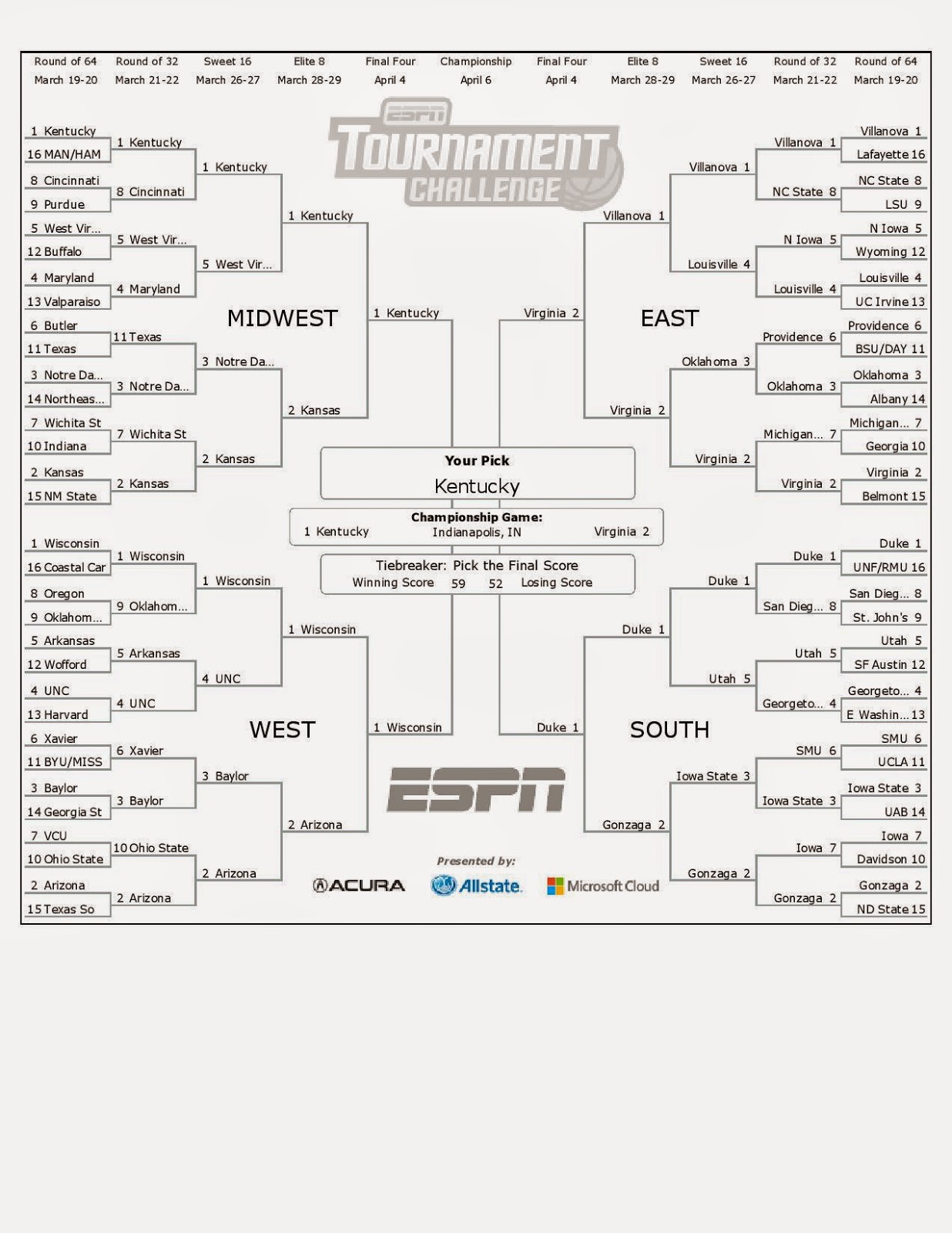 Note: The winning score prediction was gathered from Massey Ratings.
Read more »
Posted by Michael Stock at 6:57 PM No comments:

Included are the MDS Model picks for the ACC, Big 10, Bit 12, Big East, Pac-12, and SEC tournaments. Also included are the round-by-round probabilities for each team. For the purposes of coding each conference, there are 16 teams listed, and simply empty slots for the non-existent teams. 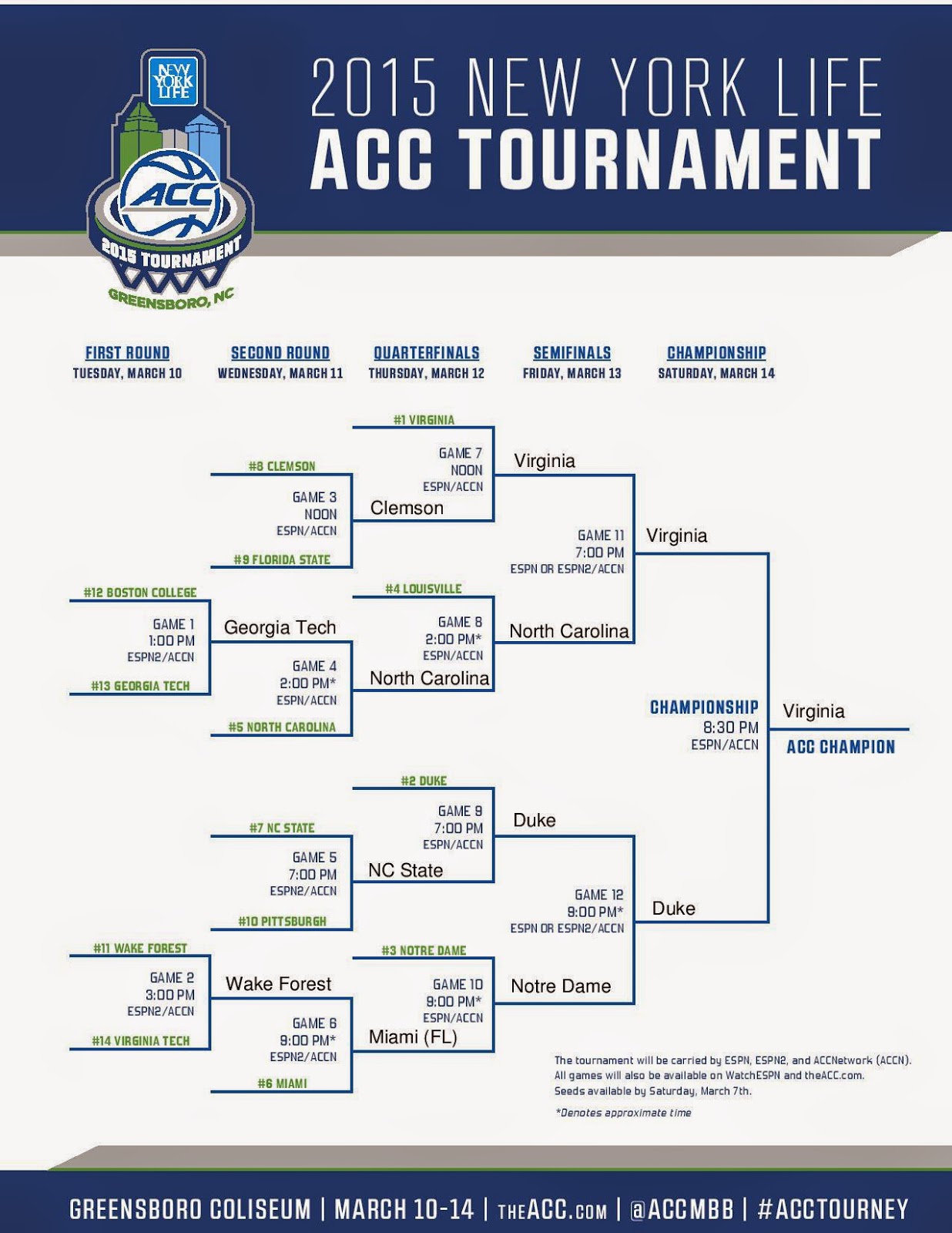 Note: Syracuse is banned from postseason play (and thus set to 0)